It is by odd coincidence that this came to be. Recently, my dad and my brother and me have been having a discussion. Last time we were all together, Jack and I teased Dad for being more than a bit odd. He’s been robustly defending his oddness to us, or rather, oddness in general.

I am not sure how, but in one email he linked to these amazing pictures from the Japanese subway, talking about how they were odd, but also spoke volumes about modern life, cities and what they do to the people who live in them.

The photographer is Michael Wolf, and by strange coincidence, his images feature in a photography festival, Noorderlicht 18, which is being held here this month and next. The posters are everywhere so I got a startling sense of deja vu when I saw the very recognisable picture of the woman above in Dad’s link.

He later found out about the festival before I had consciously made the connection, and suggested I snap the poster as my 200th picture.

I’m very glad about this serendipity. I like photography and I am interested (enough to be attempting a 365 project) but I rarely consume photography- going to exhibitions and such, but I am really interested in the theme of this one, the metropolis. I am going to go and spend and indulgent day looking at the work of people far more talented than me when I get back from Turkey. I was pleased I thought to frame this with the town hall in the background, rather than just the poster on its own. I hope it is a ‘better’ shot, but the picture of the lady just blows me away. There is something very arresting about it; something about the light and how here eyes are obscured: seeing but not seeing. It is very bleak.

I am determined to blog the ISAP conference this time around, but I might not have the internet while I am away, so there might be a hefty geophysics related post in about ten days.

People who know me well or have been paying attention recently know that I’ve been having a bit of a tough time. It is one of the reasons I’ve not been writing recently- I’m really wary of ending up using the blog as a venting place. I don’t think the internet is the right place for doing writing-as-therapy. I have my diary for that, thank-you-very-much.

I’m also pretty sure that most of you don’t really want to hear that I am a bit homesick, my issues with writer’s block are currently biting me on the ass, and that I’m having some health issues that have made me seriously sleep deprived. These things do not add up to someone in the best frame of mind.

But NOT writing becomes a massive burden. The longer I avoid blogging (and writing my paper diary) the harder it gets to start again. And most of the time I like blogging.

I don’t have any cool archaeology stories of my own just at the moment. I am in that quiet time, in between fieldwork and wrestling with writing papers (hence the writer’s block)… I’m trying to meet some self-imposed deadlines to impose some sort of order on it all, but the health thing has interrupted stuff somewhat in the last week or so.

I’m off to Turkey for ISAP in just over a week, which is pretty exciting. I’ve never been there before, and it is the furthest away from home, culturally, that I will have been (I hope that’s not offensive?)… I’m going to Izmir, which has all kinds of amazing archaeology from Ancient Greek to Byzantine to Medieval. The conference has lots of tours planned into it, so there will be plenty of pictures and so forth when I get back. I’m hoping that the conference will be inspiring and useful: it is a great chance to see the most current research and talk to world experts about particular issues with what I am working on at the moment. A lot of the familiar folks from the UK don’t seem to be going though, so I’m also filled with slight social nerves at the thought of being there as my own entity for the first time and no supervisor to be introduced by.

So, some archaeological thoughts. The National Planning Policy Framework is making the headlines back home in the UK. English Heritage have come out with their concerns and joined the National Trust in calling for some serious revisions to the changes. What is particularly concerning is the presumption in favour of development, and the concomitant reduction in protection for heritage and the natural environment. I read some interesting and worrying things about planning interventions only being possible where there is already what is called a ‘local plan’, and only 30% of local authorities in the UK have these. It all sounds like a bad idea to me, and seems to be a continuation of the changes this government is making under the mask of ‘deficit reduction’ when really they are deeply ideologically driven. There is no good evidence that current planning law has anything to do with the problems in our economy, or the housing crisis. Developers are sitting on planning permission for a ridiculous number of new homes. At this rate, I am wondering if I am going to recognise the UK when I move back… if I move back…

Archaeology has seemed to be making the news a lot recently; that might be because Digging for Britain is coming up on the BBC and they’ve been putting out little articles all summer about the sites they’ve visited as part of making the series. One of them was a site I worked on during my PhD research; Carn Menyn, which has drawn a bit of controversy. The Guardian article about what was found at the site and what it might mean is much more comprehensive and sensibly stated than the BBC piece. I did some geophysical surveys aimed at establishing the nature of the monument; if there was something prior to the chambered tomb, and if so, what it’s form might have been. I’m very interested in catching up with Prof. Darvill and finding out if my interpretations were correct, or useful. We had all hoped that some sort of excavation would take place during my studies so I could include the results in my thesis, but events caught up with us and the chance to excavate at Stonehenge took over things a bit! 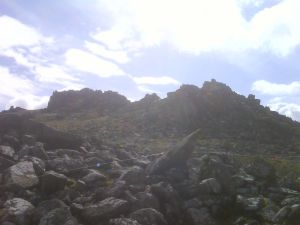 It’s also good to see sensible articles like this one about recent developments in the study of Human  in that it discusses the actual science of making these links and identifications, rather than just sensationally reporting a ‘missing link’.